In Memory of a Holy Man 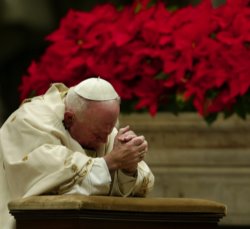 Today marks the 1st anniversary of the death of Karol Wojtyla.

We all know him as Pope John Paul II and the Pope that made the whole world see the Catholic faith as a humble and loving religion. He took part in the fall of the Berlin Wall and the fall of communism in Eastern Europe. A year ago as I recall, The news all over the world announced that the loving and caring Pope passed away on his room. He was relieved from is suffering of his illness died a happy man. Thousands and thousands of people outside mourn and prayed for the soul of a great man. I dedicate this day to him for I thank him for being an inspiration to all.

Posted by Siopao Master at 4:39 PM