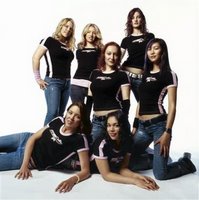 In professional competitions and vast online communities, groups of female gamers are demanding respect from game makers and challenging the assumption that video games are the domain of geeky boys in dark basements.

Four years ago, avid gamers Amber Dalton, 30, and her twin sister, Amy Brady, had never come across another woman during their hours of playing games online and at gaming parties.

Today, after walking away from a six-figure corporate job, Dalton runs an online community of nearly 600 female gamers called the PMS Clan. Brady, meanwhile, is a professional gamer and member of the Ubisoft-created all-women gaming team, the Frag Dolls, under the handle Valkyrie.

Through tournaments and their presence on the Internet, the PMS Clan, Frag Dolls and other teams like the Girlz of Destruction have raised the profile of women gamers, who make up 20 percent of the hard-core gamer demographic, according to market research firm The NPD group.

PMS' professional team and Girlz of Destruction have also grabbed the attention of corporate sponsors Verizon Communications Inc. and VIA Technologies Inc., which help them make a living as pro gamers.

But what has made the PMS Clan a success among women, according to Dalton, is that unlike other groups, PMS focused on building a community rather than seeking out pro gamers. The group laid down a code of conduct for its members that barred players from making negative comments about one another and encouraged everyone to play regardless of their skill level.

"We didn't do things the way a lot of the kids had done it previously," Dalton said in an interview. "When women are having that fun environment to play in, where they are encouraged, they play more."

That's not to say that members of PMS and other gaming teams aren't competitive. PMS members are required to practice eight hours a week and their teams finished in the top eight in a major "Halo 2" tournament last year.

Both games fall under the first-person shooter category, a genre of violent games typically marketed to players fueled on testosterone rather than estrogen.

"These women aren't slouches. They are obviously very talented," said Phaedra Boinodiris, who runs Womengamers.com, a Web site about women and gaming.

Competition aside, however, the common refrain among women gamer groups is that they aim to promote female gamers of all types and grab the attention of game makers who traditionally have focused on creating games for men.

"There are a lot more women who do play, so it's really a matter of the industry marketing to them," said Morgan Romine, 25, a Frag Doll and an online marketing manager at Ubisoft who goes by the game handle Rhoulette.

So far, getting attention hasn't been a challenge for groups like the Frag Dolls, who were recruited by Ubisoft two years ago to help promote its games.

"Girl gamers tend to get a lot of attention because we tend to be the minority," Romine said. "By virtue of being a novelty we usually got a bit of attention."

At the same time, however, the Frag Dolls have been criticized by some in the industry for reinforcing sexual stereotypes because their members are all young and pretty.

But Romine and others said those criticisms simply reinforce the prevailing notion that women who play video games can't be feminine.

"People have a stereotype that gamers in general are ugly and huge and have glasses. It's not how it is anymore," said Louise Thomsen, 26, a member of the Scandinavian team Les Seules. Her game handle is AurorA.

Les Seules -- French for "The Only Ones" but in English they call themselves "The Outsiders" -- has parlayed its success on the European "Counter-Strike" tournament circuit and its team members' good looks into a planned reality television show.

Founder Sofi Bystrom, 22, whose handle is Sophie, said the team is hoping the show will help them pick up corporate sponsors who would be able to help pay for trips to tournaments.

As Les Seules, the Frag Dolls and others know, for women trying to stand out in an industry dominated by men, being cute is a useful way to get noticed.

"Let's not get away from the power of the boob factor," said Dalton.