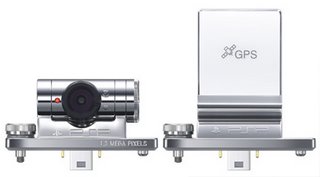 PSP Vault is reporting Sony has finally released some solid information about its two upcoming PSP peripherals - the camera and GPS add-on.

According to the site, the PSP camera will be released in Japan Nov. 2 for 5,000 Yen (roughly $43) and will have 480x272 resolution for videos and 640x480 resolution for photos. In addition, it will be able to record 15 seconds of video and will be bundled with Chotto Shot photo software.Using AdHoc, you'll be able to transmit videos to other PSP owners. Movies recorded using Chotto Shot can be exported to AVI for viewing on your PC.

The GPS add-on will be released in Japan Dec. 7 for 6000 Yen (about $51) and will include Navigation software. Also, it the following games will have GPS support: Metal Gear Solid Portable Ops, HomeStar Portable, and Everybody's Golf. 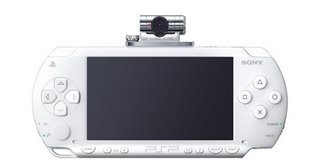 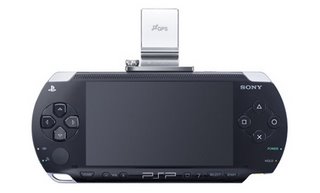 Posted by Siopao Master at 9:34 PM