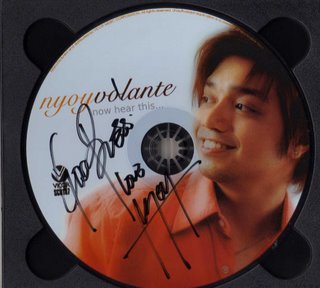 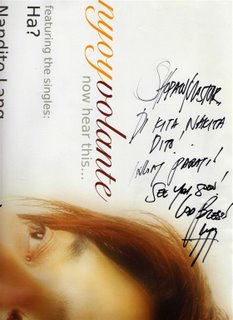 Who would ever thought that Nyoy Volante still remembers Siopao Master

Nyoy Volante and his new band performed today at SM North Edsa. I couldn't come because of work, but my sister came for me instead. She bought the new album and had an autograph on it, when being asked who it is dedicated to, she told Meynard (percussion, a friend of mine) it is for Siopao Master, and he said "Si Siops? Saan?" My sister told him that I was busy on my work and gladly signed the poster. Next Nyoy signed the poster and was surpried that my name is on it and quickly looked for me. Then, Juliet the violinist asked who is Siopao and Nyoy told her that I'm the Dark Angel of his angels. Hehehe, cool!