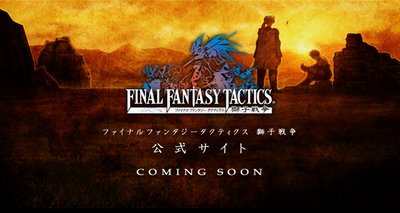 At least in Japan, you'll be able to fight The Lion War against a friend.

March 14, 2007 - Square Enix confirmed to IGN today that the upcoming PSP remake, Final Fantasy Tactics: The Lion War, will feature multiplayer battles. The two-player skirmishes will paint one team red and the other blue so you don't mistakenly attack your own Monk, and will have a set number of turns so as to prevent one player from simply avoiding the other forever.

Set to release in Japan next month, Square Enix unfortunately could not confirm a North American release at this time. The PSP is region free, though, so there's nothing stopping Tactics fans from importing the game and challenging a friend to a battle in Ivalice…except maybe all that darned Japanese text.

But that's what FAQs are for, right?

Posted by Siopao Master at 8:30 AM 0 comments

I am now officially a member of the Vista Boys. A group of young men who owns an activated Windows Vista Ultimate.

Just recently baught a new mobo, an ASUS V800D-X and installed the new Windows Vista on a freshly reformatted hard disk. The interface is an eye candy and the security is robust. XP users are invited to jump into Vista as soon as possible.

A message to you 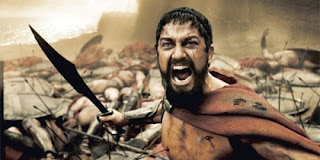 If you went and saw 300 this past weekend, bravo! You have good taste in movies. If you were a reviewer that panned it because it was “too gory,” “too historically inaccurate,” or “too video game-like” shut up grandpa! You are way out of touch with what the public wants.

Moreover, the visual style behind 300 was largely behind it’s appeal to mainstream audiences. It also has the potential to revolutionize the way filmmaking is done in the future. If you were wondering what sort of technology was behind the effects, Online men’s magazine Baller Goods has the answer:

“Post production took almost a year and took 10 visual effects companies from three different continents. It was edited entirely with Avid and Final Cut Pro. All the 3D effects were done in Maya, XSI, and Lightwave. The 2D effects were done with Shake, Inferno, Fusion, and Combustion. All of the color management was done with Truelight software. Another interesting fact is that most of the film was shot at 50fps to 150fps. This is much higher than most films. The film was transferred to HD SR tape and Quicktime, with Quicktime being used for the HD preview cuts. Macs were preferred by the filmmakers of 300. Even though Final Cut Pro was not the main editing software used for 300 it was preferred over Avid. Shake was also the main program used for the 2D effects and Quicktime HD was the choice for movie previews. The main visual effects team that worked on 300 said that they used 15 G5’s for creating all of the visual effects, and ended up using 16 terabytes of disc space for the entire project.”

Fruity Pebbles Sneakers: What the Hell is Wrong With LeBron James? 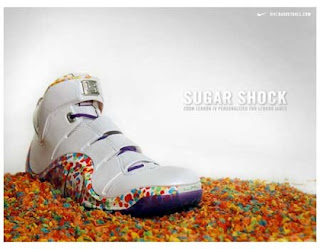 LeBron James is a fantastic basketball player, he has good taste in cereal, but I don’t know if combining the two was a great idea.

The Nike Zoom LeBron IV is inspired by LeBron James’ favorite cereal - Fruity Pebbles. It’s retarded, but I wouldn’t be surprised if they sold a million pairs.

Information on pricing and availability has not been made available.

The HD format should permit, according to Microsoft, to offer better quality pictures, with a better compression ratio than JPEG. On BETA Release for Windows. A file format plug-in to add HD Photo open/save support to Adobe® Photoshop® software. Available Here.

How to Woo Japanese Women

So, you're into japanese women huh? The looks of Utada Hikaru. Goto Maki and Tomiko Van pumps your blood. Then these 4 lessons are for you.