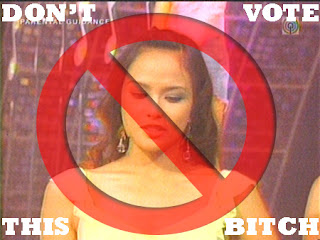 An employee of ABS-CBN confessed that the currently happening situation in PBB season 2 is all but crap.

This is how the fraud currently happening in Pinoy Big Brother Season two.

"I have worked for ABS-CBN for almost four years now, since i finished my M.A on Mass Comm - Broadcast Communication in 2003. As part of production on News and Current Affairs, my work has been mostly rewarding, with good benefits despite the low base pay (I’m including this part so you would understand why I accepted the offer to be transferred to conceptualization of some reality shows particularly the current one, PBB.) Because of the sensitivity of my status (I am still working there) I cannot divulge my name, gender and current position in ABS-CBN. Still, I would like to inform those who are interested (who, most probably, are now wondering why Wendy Valdez is still inside the house and not evicted yet, as most must have assumed.)

When I was asked if I wanted to be part of the conceptualization of the current and upcoming reality shows that ABS-CBN would be showing (with higher compensation, obviously), I accepted the offer. How bad can it get, I said, since most of these shows run on public voting and my job would mostly include thinking of the “challenges” that Kuya instructs the housemates to do.

Apparently, conceptualization incorporates more than that. As I have known after the pre-screening of the auditioners, as early as the application process, we have to note who we think will “attract the public most” and who we think will “make the ratings go off the roof.” After the initial screening, we had to choose the top 100 of the batch, and even though some did not “theoretically pass” the audition (some weren’t able to complete the documents needed), since they have mass appeal, they made it to the first cut, and some were even included in the finalists that entered the BB house.

As you all know, the eviction process is supposed to be based on the votes that the “nominated housemates” - the housemate with the lowest vote will be evicted. I dont know about the previous editions of the PBB (since I only worked under this series this season), but what surprised us the most was when we were informed that the voting only affects the decision minimally - that the voting actually shows who the public wants to see again the following day - but that was it. the truth is, there are so-called “talent auditors.” These people are the ones who really put the big decision as to who will be evicted, and who will stay. Of course, this never became obvious since I cannot deny the fact that we receive millions of votes during eviction night. That is, until Wendy was evicted, and then later returned to join the housemates who are legitimately still in the contest. And the reason is this: the Wendy-Bruce loveteam is working. Have you ever noticed why most of the episodes are focused on the Wendy-Bruce loveteam? It is because ratings are really high, meaning that people want to see how their relationship develops.

I have never received this much question about my work before. My friends want to know how someone who was already evicted be suddenly returned to the house. Actually, that is one of the “twists” that are really planned to be included in the show. But there are actually three evicted housemates that were vying to be returned to the house, and Wendy was one of them. We were asked who we think should be the one to return to the house, and Zeke won. But after discussing that the Wendy-Bruce love team was too interesting to abruptly end, it was Wendy who got the spot. Aside from that, we were later informed by one of the production managers who was disappointed with the decision, Wendy was “Direk Dyogi’s pet.”

I told this story to some of my friends, and they were surprised to know the truth, particularly because some of them were voting for their favorite contestant. I told them only one thing - that they are just wasting their money in voting. As I have personally seen, the path of the contest is already drawn, and the voting only affects the decision minimally, as I have said. This only tells us who the public wants to see again inside the house. The eviction of Nel tonight is the classic example. Nel got the second lowest number of votes, Wendy got the lowest. But the administrators think that perhaps the Wendy-Bruce loveteam is still up, so we had to give it one last shot. If the ratings go down, or if on Tuesday (the next eviction night), Wendy still gets the lowest vote, she’s out of the contest.

I did not want to reveal all of these, partly because of my loyalty to the company that has given me so much over the years, but I personally think that it is unfair to make one suffer for another’s gain. Since I have done background checks on the housemates, I know for a fact that Nel isn’t very well-off, and should have been given his chance fairly. I feel bad to know that I am included in a ploy to confuse and even fool people into believing that they control the outcome of the show. That is why I went ahead and did this post. I wanted people to know how PBB works.

If you really want to let the network know how disappointed you are with the outcome, make the ratings go down at least until Tuesday. And do not waste your money in voting, or if you really want to and have the means to do so, vote for who you really think should be included in the big 4 - this way, hopefully, Wendy will be out on Tuesday for good."

That explains why that mothafucking Wendy Valdez is still inside the PBB house. Well I'm not watching this crap anyway, but my family seems to like it and I can't stand to let this slip through. So please, don't vote for that Wendy Valdez bitch, for the sake of humanity.

Posted by Siopao Master at 3:21 PM

I actually don't watch PBB but it's not unusual for these supposed reality shows to be "scripted" when it comes to who stays and who goes. We all know that PBB is an income-generating monster of a show, and they want to keep people watching by letting Wendy stay.

that's why I don't watch this crap. They making pinoys a fool of themselves