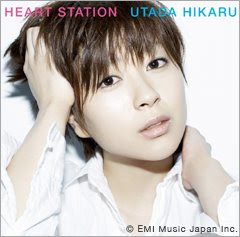 Hikki fans unite! Utada Hikaru (known as UTADA in the US) is about to release her new album Heart Station this coming March 19, 2008. Details after the jump.

Utada states on her personal blogs that she is currently working on both her upcoming Japanese and English albums simultaneously. She’s been busy creating demos for new tracks at home. On January 16, 2008, Utada (on her official blog) confirmed that there are two tracks on the album that will include a strings section, Flavor of Life -Ballad Version- and a then-untitled one that was being mixed. On February 1, 2008, Utada confirmed that she had begun mastering the album's final track, tentatively entitled "Yakekuso (やけくそ, Desperation?)". She confirmed that this was the second track on the album to include a strings section, and that a physical demo had been burnt for her to work on from home.Her official website has confirmed that 13 tracks will be included on the album. A B2 sized poster will be included for people who reserve a copy of the album.

Posted by Siopao Master at 1:17 PM