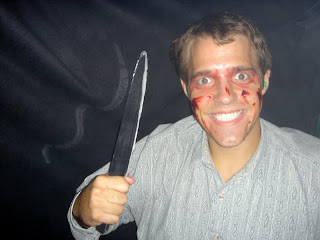 An article which had been circulating over the blogosphere for some time now, who's writer is suspected to be suffering from ADD or maybe worse, is considered as a hoax. Yes, I repeat, the Tierra Maria Estates Scam is a Hoax

note: the person on the pic is not Tim, that person still looks human, unlike Tim who looks like Zordon from Mighty Morphin' Power Rangers

The article is about a foreigner who was claiming that the whole Filipino community is scamming him. A little bit sarcastic, but the situation is heading in that direction anyway. Everyone who are against his "carefully constructed drama" are considered part of that scam (click here for the complete story). Oh please, if you know Timothy Ellis Cumper, if you still love that person, or you love humanity, take him to a psychologist, an expert one if you can, so that he can be treated. If you are generous enough, take his friend Jim also. This guy is suffering from delusion. He thinks that he's the greatest geek on Earth, which is an insult to geeks BTW. Again, save the world by saving Timothy Ellis Cumper, or better yet, save humanity.

Posted by Siopao Master at 1:16 PM

You're right! Thanks for the article!

nice information about the physiological treatment. thank for sharing this information.

yah you are right some stupid fellows will do like a psycho
government should take a serious actions to them.
ibps recruitment

wow ! mentality of such persons will be understood after reading your blog information. this blog is really very much useful for psychology students.Paytm Coupons