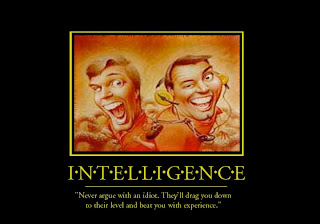 I've been away like just three days away on vacation and I was bombarded by messages from my friends that my site was being attacked by idiots. Details after the jump

It all started when I first posted the story about the Tierra Maria Estate scam hoax which many would agree that Tim Cumper really needs psychological attention. I was mentioned on his blog entry as a supporter of scammers. Gee, I don't know what to say, thanks for visiting my site Tim! You can ask your friend Jim to track down my IP so that he again can prove that he is the beeesst techie guy on Earth. Another thing, some guy just keeps on posting on my chat box since I featured Janina San Miguel here on my site. Maybe he/she is a supporter of some sort? He/She is accusing me of copy-pasting stuff here which clearly I quoted beforhand and indicated the source. I think he/she doesn't know how things work here over the net. Anyway, these idiots are plaguing the net for quite some time now. I wonder how are they reproducing? They're infesting the blogosphere, the forums and even those social networking sites like Friendster. How on Earth can we get rid of those idiots? It seems the supply of Iodized salt is depleting.

Posted by Siopao Master at 4:37 PM