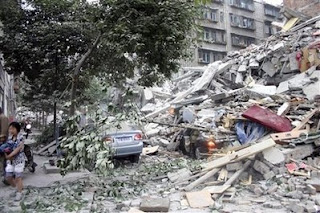 The official Xinhua News Agency said the death toll exceeded 12,000 in Sichuan province alone, and 18,645 were still buried in debris in the city of Mianyang, near the epicenter of Monday's massive, 7.9-magnitude quake.

The Sichuan Daily newspaper reported on its Web site that more than 26,000 people were injured in Mianyang.

The numbers of casualties was expected to rise due to the remoteness of the areas affected by the quake and difficulty in finding buried victims.

The quake was China's deadliest since 1976, when 240,000 people were killed in the city of Tangshan, near Beijing in 1976. Financial analysts said the quake would have only a limited impact on the country's booming economy.

Posted by Siopao Master at 9:26 PM