Japan planning to have its first woman Prime Minister 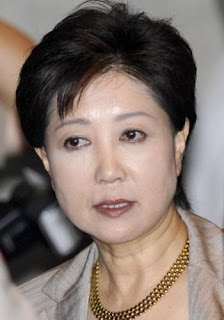 Yuriko Koike emerged Wednesday as a possible contender to be Japan's first female prime minister, a former television anchorwoman who has been a defence minister and environment minister, She will contest a party vote on September 22 to replace outgoing Prime Minister Yasuo Fukuda. Reminds me of former president of the Republic of the Philippines Corazon Aquino, the first woman president, emerged after Ferdinand Marcos was exiled. Details after the jump.

Fukuda, who has faced months of low poll ratings, announced his resignation Monday, plunging Japan's long-dominant ruling Liberal Democratic Party (LDP) into crisis mode.
General elections must be held by September 2009, but the government is in trouble against an emboldened opposition while the economy, the world's second biggest, is teetering on the verge of recession.
"I want to consider what we need in general, rather than my own individual situation," Koike told reporters when asked if she would seek the top job.
"I'm contacting various people since you can't play a baseball game all by yourself."
Hidenao Nakagawa, the former number two of the party and a backroom fixer, hinted at his support for Koike, calling for a leader who backs free-market reforms that have lost steam in the past two years.
"We have to pick a candidate among reformists," Nakagawa said after meeting with Koike.
Koike, an expert on the Middle East and fluent in both English and Arabic, is known for her close ties with reformist premier Junichiro Koizumi, who was popular during his 2001-2006 tenure.
She belongs to the LDP's largest faction. Its head, Chief Cabinet Secretary Nobutaka Machimura, voiced support for a competitive race.
The vote is for the LDP's president, who then becomes prime minister.
"All of us share the view that it's desirable for the LDP, which has been driven to the edge of a cliff in a sense, to hold an active, fair election to elect its president," said Machimura, the government number two.
But the Asahi Shimbun reported that 23 of the LDP's 47 prefectural chapters have already made up their minds to back Aso.
A Kyodo News poll also said Aso was the most popular choice with the public. More than 35 percent of voters named him as their favourite among 10 possibilities, with Koike receiving nine percent.
Aso, a former foreign minister, publicly backed Koizumi-era reforms but is seen as more supportive of government spending to boost the economy.
Aso has run unsuccessfully three times to be prime minister. The former Olympic marksman is known for his hawkish views, although he has softened his image in recent years by highlighting his love of comic books and pop culture.
Currently the LDP's secretary general, he is expected to formally announce his candidacy on Monday and make election pledges, including new stimulus measures to put the brakes on an economic slowdown.
"The front-runner is Aso. That's for sure. For the LDP, Koike is a gamble," said Hidekazu Kawai, honorary professor of politics at Gakushuin University in Tokyo.
He likened Koike to the failed US Democratic presidential candidate Hillary Clinton, saying she would energise Japanese women voters.
"I think many people would support her if she keeps her spirits high," said Kuniko Inoguchi, the minister for gender equality issues under Koizumi.
The LDP election "isn't something just for men to hold and debate about," she said.
Japan has one of the developed world's lowest rates of female representation among politicians and corporate executives. Only 89, or 12 percent, of the 722 members of parliament are women.
The LDP has been in power for all but 10 months since it was created in 1955. But it lost control of one house last year to the opposition, which has tried to block the LDP agenda in hopes of winning the next elections.
"To break the current impasse, I wanted to refresh the system with new members. I want to show an LDP full of energy," Fukuda, widely criticised for his sudden resignation, told party members Tuesday.
Other potential candidates to succeed him include Nobuteru Ishihara, son of nationalist Tokyo governor Shintaro Ishihara.