The users of the online bulletin board 4chan, which LoLcats and some other internet memes spawn. allegedly hacked the results of the Time 100 where as you can see that moot is the number 1 on the ranking.

moot is 4chan's creator Christopher Poole and looks like most of his devotees are doing their best in placing him on the top spot. Not only that, they previously manipulated the remaining Top 20 spots by getting the first letter of each name which spelled “Marblecake, also the game.” 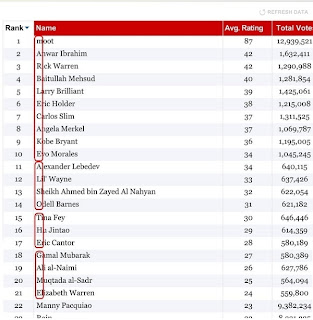 The results were hacked with an auto-voting program spread on 4chan. Currently moot still tops the ranking and no word from Time regarding the matter

Posted by Siopao Master at 9:35 PM