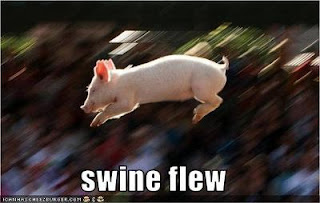 A serious case of online joke escalated a series of mass hysteria as a twit regarding a fake BBC news about the Swine Flu a.k.a. A(H1N1) with the following heading:

There has been a small outbreak of “zombism” in London due to mutation of the H1N1 virus into new strain: H1Z1.

please be advice that the site looks like the one on BBC News but if you look at url closely it is a fake site that resembles a phishing modus operandi.

People all over America and Europe who read the news via Twitter, and obviously, didn't pay attention to details, panicked. Paranoia + Stupidity = Epic Fail.