Twitter is one of the largest online service for microblogging (like blogging, but just simple phrases or thoughts). We all saw it grew from a simple past time to an internet phenomenon. We all remembered Ashton Kutcher achieved his 1 millionth follower on Twitter which is a feat indeed. Followed by Oprah Winfrey creating a Twitter account that made Twitter a household name all over the world. Everyone wanted to be famous, everyone wanted to be talked about in the internet. Recently that fame was put into question. The supposed to be "Oldest person to twit" and the "First twit in space" has been proved to be false, find out how after the jump. 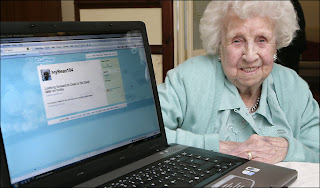 The oldest person to twit

On May 15 two UK newspapers ran the story about 104 year old woman “Ivy Bean” / @ivybean104 joining Twitter. Both The Daily Telegraph and The Sun ran with the story, which was followed up and “celebrated” by The Next Web blog.

What none of these stories told you, however, was that poor old Ivy had not joined Twitter just because it was suddenly the talk of the old peoples home. No. She joined because home PC maintenance company Geek Squad signed her up, propped her up for a photo opportunity and press-released the hell out of it. And frankly I hope they paid her, or at least donated to her favourite charity because this is one of the most self-serving, cynical PR stunts I can remember.

“I’m enjoying Twitter for the first time and having my photo taken.”

Now, she Tweeted that Tweet at “10:02 AM May 14th from web”. That’s important, because this was only one day before the story went live on the Sun, and Telegraph site at 8:20am May 15. In other words, cynical Geek Squad had already targeted Ivy as being the oldest person they could find and convince to go on Twitter. The fact it was a day before the story went live speaks volumes.

Since when did a 104 year old suddenly start using words like “feed”?

In fact, only The Sun newspaper actually indicated that this might all be PR-nonsense cooked up by Geek Squad, referring to its “Silver Surfers’ Day” campaign to “encourage more elderly people to get online”. Classic PR-guff.

However, TechCrunch’s (and here’s our apology) MG Seigler decided this whole thing was a ruse to get The Telegraph onto Digg. And admittedly, The Telegraph has been gaining a reputation for using Digg quite substantially lately. It gets a lot of traffic from social sites, and the UK press has a sneaking suspicion Tele sub editors have all taken courses in headline writing for Digg.

However, we’re happy to point out that the story wasn’t just cooked up by the Telegraph to get onto Digg - but lots of journalists and bloggers fell for Geek Squad’s PR.

Compounding the issue however is The Next Web which seems to think TechCrunch’s non-scoop was itself an attempt to get on Digg - and predictibly did a post on it in a slightly bizarre tirade. Clearly, The Next Web did not realise it was a Geek Squad press release the first time round and still hasn’t. They sign off their story with “This is clearly not a completely fabricated story.” Instead it attacks TechCrunch for not celebrating the fact a 104 year old is on Twitter, a story which “made people smile”.

Come again? Since when were independent bloggers supposed to just celebrate things - instead of getting the facts right?

My view is that WHERE stories come from is at least as important as what they are about. I hope we can all learn from this episode. In the race to feverishly post about Twitter, sometimes the facts are starting to get lost in the hype.

Oh, and to complete this ridiculous circle, feel free to Digg this post.

Update: As commenters below point out, Ivy was two years ago signed up to Facebook by her care home to be the “oldest person on Facebook”, presumably after they were incensed that a 97-year old French youngster had laid claim to the title. I look forward to the day Ivy is signed up by Digg as their “oldest user” and to her actually getting something out of being used in this way, simply because of her age.

Update II: A few people have inferred that I think @ivybean104 is actually fake - that she’s not tweeting herself. Frankly unless someone videos her doing it it’s going to be hard to absolutely verify, though her Tweetstream (e.g. “just had my tea now its a game of dominos with my friends”) looks plausible. What is slightly odd however is the fact she is following 94 people, many of whom, like @barclayjen in Columbia, SC, (Geek Squad was the first account she followed btw) she is unlikely to know personally. Unless 104 year olds are a lot more socially networked than I previously thought… 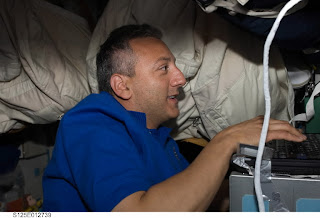 That's the question bouncing around Twitter about "@Astro_Mike," or Mike Massimino, an astronaut on space shuttle Atlantis, set to land today at Kennedy Space Center.

On May 12, Massimino wrote, "From orbit: Launch was awesome!! I am feeling great, working hard, & enjoying the magnificent views, the adventure of a lifetime has begun!"

Ever since, NASA, newspapers, TV shows and blogs have been crediting him as the first person to post on the microblogging service, or "tweet," while in orbit.

In reality, Massimino writes his updates in space and then e-mails them to Houston, where a NASA employee posts them to his Twitter profile. That often takes hours because e-mails are only transmitted from the shuttle a few times a day.

That's not exactly in line with the "What are you doing?" instant ethos of the site.

"... [I]f you're in a plane & write a tweet, but don't hit send until u land, did u tweet from a flying plane? no, u tweeted from land," "josh_sternberg" posted recently.

James Hartsfield, a NASA spokesman, acknowledges that Massimino's system strips away some of the immediacy people associate with the 3-year-old service, which has exploded to include millions of users in recent months.

But he said it's the only way to do it because astronauts cannot directly access the Internet.

To preserve the intimacy of Massimino's tweets, Hartsfield said that other than adding "from orbit" before each message, NASA does not edit them.

"It's as close as you can possibly get to a post from space," Hartsfield said. "Anything you are going to do from space is going to pass through some type of hands before it gets to its final destination on the Internet. ... Maybe someday in the future, for the space station, they will have [Internet access], and then it can be a little more streamlined."

Hartsfield said NASA is open to other methods and pointed out that in June, shuttle Endeavour commander Mark Polansky ("Astro_127" on Twitter) also plans to tweet from space and answer YouTube video questions.

Most in the Twittersphere don't seem to mind Massimino's unorthodox way of tweeting. Instead, they marvel at seeing updates on their phones or computers written by someone looking down at them. Massimino has more than 330,000 people following him.

"I marvel in jaw-sagging wonder at @Astro_Mike's daily routine, although I bet he'd enjoy a nice sit down and a cup of tea right about now," "mcsubs" tweeted Thursday.

And in the tradition of Twitter, others are using the milestone for complaining.

"Explain to me why I can not get phone service ... but an astronaut can tweet from space??" asks a tweet from "cwrightmn."

How far can you go on deceiving people just to be famous?

Posted by Siopao Master at 4:05 PM

And now the Philippines has LolaTechie on Plurk. Some people never learn...