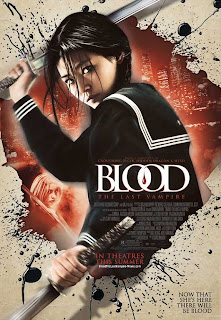 Remember Jeon Ji-Hyun? For those of you who lived under a rock all this time, she was the oh so adorable lead actress of the Korean film My Sassy Girl (which was later adapted by the Americans) Well, she's known now as Gianna Jun in the US as she stars on this Japanese-adopted-by-American film Blood: The Last Vampire. Wait wait, a Korean girl is starring on a Japanese movie produced by Americans?! Yeah, much like Memoirs of a Geshia, Chinese girl (Zhang Ziyi) starring on a Japanese movie produced by Americans. Let's cut the chase, If you watched the anime version of this film then I recommend you stay away from this "adaptation". The story sucked big time due to the Americans "forcing" their own story to the plot, Admit it, Alice's story is not relevant to the main story, heck the story can progress and end without it! Why oh why do you always ruin such a good story just to add your "westernized" version? Anyway, the action sequences were good but I was dissappointed when Saya flying kicked one of the vampires, darn it! why is she wearing shorts?! What's the point of wearing a seifuku (sailor uniform) if there's no panty shot?! hahaha peace! Even though this movie has its ups and downs it is all forgiven due to the fact that Jeon Ji-Hyun acted well on an action film. God I love this girl

Posted by Siopao Master at 8:32 PM