A Wedding Under Gundam RX-78-2 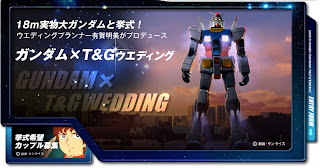 It wasn't long ago that a wedding company Take and Give Needs (T&G), which normally arranges weddings in more conventional settings (which in Japan might include fake priests and even Hello Kitty) offered their customers to celebrate their matrimony with Mobile Suit Gundam RX-78-2's likeness glowering down on them. The lucky couple were chosen out of a 500 hopeful Gundam fan couples. 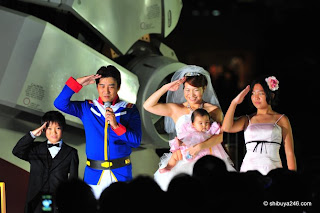 The couple, both long time fans of the original series, chose this special package to renew their vows and this is really a wedding to remember. The groom wore a suit that based on the uniform of Amuro Rei, the main protagonist of the original series. Also present was the original director of the series, Tomino Yoshiyuki, who handed the happy couple a special gift. The couple named their daughter Seira, which is after the Gundam character Sayla Mass