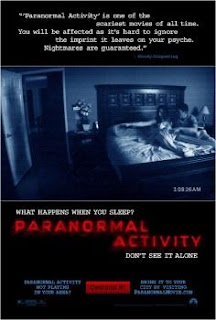 November 1, It's All Saint's Day to the Gregorian calendar and it is a "day of fear" to somebody else. It is the day you try to scare yourself, not because you got nothing to do but because everyone does it. Anyway, in the past I use to play Resident Evil 2 on my Sony Playstation every November 1 but as time passed by I ended up watching horror flicks, specially that certain Japanese horror called The Ring Trilogy. Anyway, this year somebody recommended me to watch a film that was shown last 2007 overseas and was re-released just this year. It's a horror movie called "Paranormal Activity". More after the jump.

Paranormal Activity is not your traditional horror flick where you see some blood, gore, screaming babes and mutilated teens. It doesn't even have special effects or such, but it is shot on the tradition of "Blair Witch Project" minus the very shaky camera. Anyway, I do not want to spoil the story to all because it will defeat the purpose of the movie. All I can say is, this movie moves away from the typical horror cliche, no make-ups, no costumes, no overly acted screaming and gives you just raw fear. Go ahead, watch it, but don't come back to me crying and weeping.