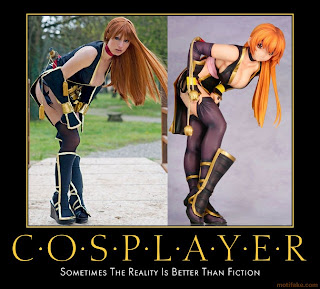 Cosplayer - The term used for anime lover or otaku who wears a costume similar to an anime character and role playing it in front of other people.

The recently concluded Ozine Fest 2010 opened the door to new cosplayers who wanted to show their talent, creativity and charisma. I was once a cosplayer before and I know the hardship each cosplayer experienced during those hours off stage and on stage. The torturing heat and the grueling long hours of standing and walking can really deplete their energy. Sadly, some folks are insensitive to cosplayers and they'll do anything to get a picture with them. I know, cosplayers should entertain anyone who appreciates their costume, but hey they are human too. A little consideration is much appreciated and never ever forget to respect them. I witnessed "attractive" cosplayers being mobbed by photographers. Some were taking a shot from a very uncomfortable distance and some even managed a panty shot. I experienced talking to one of my cosplayer friends when somebody grabbed her and took a picture. A simple "Excuse me" or "Sorry, can I interrupt you" would be nice. Some cosplayers were left out when their "attractive" companion were being mobbed. Some were even placed in a very uncomfortable situation because of some pervert.I know some may think I am sucking up to cosplayers or I am just looking for some attention, but let me tell you this, if you were on those cosplayers' shoes what would you feel? Kudos to all the cosplayers out there who have an incredibly long patience and understanding. Continue what you are doing and enjoy cosplaying