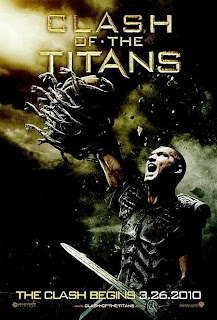 A remake of the 1981 film, Clash of the Titans reminded us what it's really like fighting the gods.

Thanks to Percy Jackson, Greek mythology became a children's fantasy. Clash of the Titans showed that mythology is not synonymous to fantasy but to pain. From start to finish there was no dull moment. The action scenes are well made thanks to new CG techniques. Although the story was altered from the original, the concept was still there. The musical score fits the mood of every scene and the dialogs are well delivered. Although some lines will make you wonder if that was already known during that time or not. But hey, this is Hollywood. They can get away with anything. If you like mythology and was not contented with Percy's. Then this movie will satisfy your craving.

blood on the mirror said...

This was based on the original?

I dunno. Didn't find it entertaining and the last battle scenes were anti-climactic.

But it did get me interested once again in Greek mythology, so I guess it's okay