Rape is one of the most gruesome thing that could happen to a woman. The psychological damage and the physical damage can drastically change the victim's life. Most of the time, women were powerless to struggle and fight back her attacker. Pepper sprays or tasers are effective counter measures but not everyone can afford them. There is a new invention that can help women battle against rape. Details after the jump. 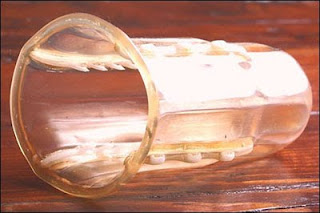 Sonette Ehlers… A South African woman working as a blood technician with the South African Blood Transfusion Service invented a condom that will "trap" the attacker during penetration. The product is called Rape-aXe. A revolutionary contraceptive that is worn by women like a tampon that has bards inside that will snag the attacker's "johnny" and will cause him excruciating pain. The condom can only be surgically removed once it "traps" the attacker so it would be easy to catch the rapist by the police. I wonder how will they test the product and how much will it cost? Anyway, good luck on this invention.