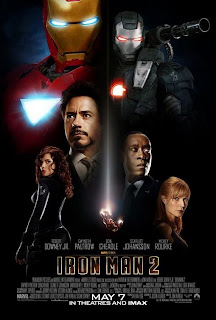 DISCLAIMER: Don't worry, this is not a review that contain spoilers. So read on.

It's the second installment of yet another Stan Lee creation. So does the second movie lived up to the expectations of the fans? The details after the jump

So I was just saying, with all those technological fetishes and sleek cars, add up some lovely women and we have a movie here for young guys like me!

The special effects were really an eye candy, thanks to Hollywood's advancement in the visual effects department. Tony Stark's one liners add up comedy to the mix. My only gripe here is there are only a few scenes that really looks good on 3D. The fight scenes were scarce. Despite this, I still recommend this movie if you are a marvel fan, or just some geek who fancies technology.

BTW, the poster kinda reminds me of Star Wars

Posted by Siopao Master at 2:11 AM