Aquino-Binay as New Leaders of Our Country 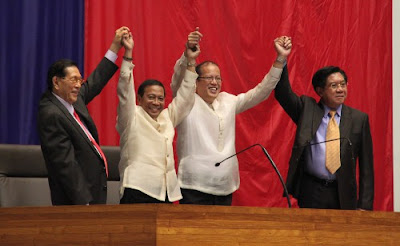 Benigno "Noynoy" Aquino III and Jejomar Binay were officially proclaimed as the new president and vice president respectively. After the first national automated election last month, the results were finalized and the people have spoken. Will the two hold to their promise? Will they finally stop the crisis that plague our nation? Noynoy has a reputation to protect, the reputation his parents patriotically built. Jejomar bragged that he changed Makati, can he change the whole country? They will officially start office on June 30 and there's a big challenge awaits them.

watta sad day for our country.