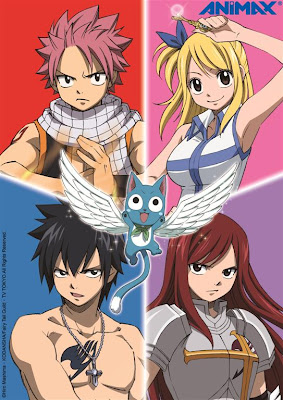 The world's leading anime channel is going to air one of the highest rated anime of 2010. Details after the jump

Animax Asia is going to air one of Japan's highly rated anime. Fairy Tail will premiere on September 30, 2010 and will air every Monday to Friday at 10pm.

Set in a fantasy world where magic is the way of life, Lucy had always wanted to join the famous Fairy Tail mage guild and travelled to the kingdom of Fiore in that hope. Along the way, she crosses paths with Natsu and his talking-and-flying cat Happy who are seeking a dragon.

Posted by Siopao Master at 6:59 PM

thanks for shearing this information to us.miss you quotes

wonderful article share to me. nice information on the anime a1 pictures.thanks to shere this article.
careerbix

animation is a good art and i hope this fairy tail animation thanks for sharing this information.
ibps recruitment