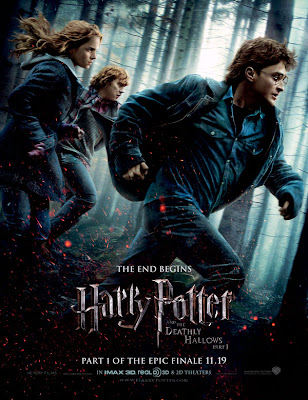 The two-part epic fantasy film based from the popular novel finally hit the screen. The reason behind the splitting of the final movie is to avoid truncating the novel. Is it worth it or the movie did not meet the expectations of the millions of Harry Potter fans? Read the review after the jump.

I was supposed to watch the film on IMAX 3D but both SM North and SM Mall of Asia were sold out until Sunday. So I settled down with the ordinary screening, but enough of that.

Just like the previous movie, some might like the latest one, and some die hard bookworms will not. The movie was made into a two part to avoid omitting a lot of scenes that was on the book as answer to previous complaints. But for me, who read the book (link contains spoiler) Some details were still omitted after all, like the events on Godric's Hollow and those on the Ministry of Magic. To be fair with J.K. Rowling and the film writer Steve Kloves, it was really hard to cram everything into 146 minutes. So let's just concentrate on the film shall we?

First off, the cinematography was new compared to previous movies. The dark, dangerous atmosphere was shown dramatically on the whole film. The over-exposed like film achieved a gritty, moody feel. No more beautifully colored garments and fabulously designed Hogwarts. All was left were quiet lonely places and dirty rugged garments as the three flee for their lives. The effects, especially those of spells were beautifully rendered (which makes me want to watch it on 3D if given a chance). The tale of the deathly hallows was remarkably presented in an ethnic-like presentation, which is new to the series. Radcliffe, Grint, Watson and the rest of the original cast acted a lot more maturely this time as they have grown with their characters.

If you were expecting a happy, fantasy film then this one will disappoint you. There were no scenes that reminisce school life. It's more like a suspense thriller, where the protagonists constantly chased every now and then. Expect some violence and some blood in some part of the film as Deathly Hallows departed from a children's fairytale into a serious film.

In the end, just like before, the reception of the film will be split down between the hardcore fans and the movie junkies. Watch it on 3D if you get the chance, it will be worth it.

Harry's transport to the burrows makes me wanna watch this in 3D. I sincerely hope I'd have the chance.
I totally cried when Moody died.

ok, thanks for sharing what you read on imdb