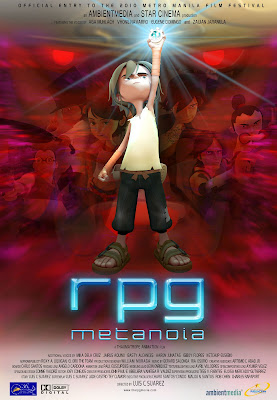 It's the Metro Manila Film Festival once again and it is mandatory to show all Filipino made movies from December 25 up to January 7. One of the entries got my attention, the first Filipino full length CG animated movie finally became a reality. RPG Metanoia is an all Filipino CG movie production. Did the movie lived up to its promise? Or is this another epic failure? Find out after the jump.

During the promotion of RPG Metanoia, I confess that I was skeptical. Due to the history of fails in past films, my faith in the Philippine movie industry was a size of a walnut. I was a bit curious in this "innovation" so I ended up watching Metanoia.

A heed of warning, This movie was five years in the making and you can see it in the quality of the animation. It's true that the movie is in full Computer Generated (CG). But like I said, it was bit of outdated.

Story-wise, the plot reminded me of the famous anime .hack but with added Filipino twist. As with other film fest entries, this movie gave a moral lesson specifically for the children who waste their youth on MMORPGs. You can see in the entire movie the elements of the "Pinoy culture", from the tricycle to the pakbet and longanissa, everything is all Filipino. Hardcore movie geeks may find Metanoia heavily referencing to past successful movies, from some actions sequence of the Matrix, to some dialog of Pinoy heroes. But some Hollywood films also do this so I think Metanoia can get away with it.

The musical score was impressive. No cheesy novelty song here (thank God). My only gripe is the the quality of the dialogs. It's like watching an anime dubbed for local TV. The sound is kinda monaural and it will get in your nerves when all of the kid characters speak at the same time. Don't get me wrong, I like the sound effects and the insert songs, but when it comes to the dialog, I hate it.

The eye candy can make little kids drool, but to the "older" audience it was kinda repetitive and old. But who am I to criticize the works of my countrymen who clearly showed that the Filipino can do it. Maybe, if we have the top of the line hardware, the future of our 3D animation will be at par with those of Pixar and Dreamworks.

RPG Metanoia is made by the Filipino, for the Filipino. A little tweak and it will be a world class quality of animation.