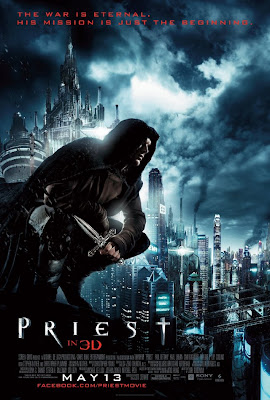 Vampires were often a major selling point in a movie, especially if those vampires are sexy babes or hunks that sometimes sparkle when hit by the sun. The movie Priest though offer a different perspective on the appearance of vampires, now portrayed as grotesquely looking beasts with no eyes and possessed huge teeth. Can this movie please the ever growing vampire fanbase or will it be a flop just like the other vampire movies before it? Find out after the jump.

Priest was adapted from the Korean manhwa (Korean's version of manga) with the same title. The manhwa was inspired by the anime and video game Blood which turned into a movie last 2009.

The visuals of the film were limited due to the fact that the movie's setting was in the middle of the desert. The movie was turned into 3D during post production so watching it on 3D was a disappointment. Only a number of scenes can be appreciated in 3D and the rest were just plain and boring. I expected lots of action sequences involving the main character ,which by the way is cool according to my standards, but sadly not much action were shown. Fast paced action were slowed down reminiscing those of past action films like the Matrix and was beautifully executed but nothing new there.

The story deviated from the manhwa (just like other adaptations) and turned into a cliche of past vampire films. Some minor plot holes can be noticed (which is typical on a Hollywood film) and the character development were limited (due to the a sequel perhaps?). Action fight scenes seems limited so you might be looking for more.

Paul Bettany portrayed the character of the priest well which performed most of the action sequences. Maggie Q was just for eye candy as her participation was limited. The antagonist was bad-ass and should have more action sequences as well. If ever there will be a sequel, the writers should focus more on the character development and add more screen time to the other characters.

The musical score was right on as you can hear Mozart's masterpiece fill the theater house. Sound effects and constant growling from the vampires were executed well.

Overall, this movie was good on the outside, but if you look closer, it's just another vampire slayer cool enough to kill some vampires and live another day to slay some more. Nothing much new here except for the cool weapons of the priest and the somewhat message to the Catholic Church (better watch to find out). If you're a vampire fan and looking for action like the Underworld, then this movie is for you. But if you want a deep storyline and more character development then you better look elsewhere.

Posted by Siopao Master at 1:28 AM