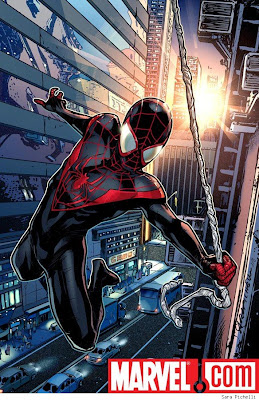 It's been a trend in the comic book universe that even the mightiest of super heroes meet their demise. From the epic death of Superman, to the assassination of Captain America, fans seriously dig this scenario. My favorite superhero finally met his own doom as the recent release of Ultimate Spider-Man #160 concluded the "Death of Spider-Man" arc (Ultimate universe only. Peter Parker is still alive in the original universe as an old man). This plot will pave way to a new Spider-Man that will be introduced this 2011. Peter Parker will no longer be the man behind the mask and the new Spider-Man will wear the new costume (see image above) that symbolizes a new beginning.