Metro: The Future of Microsoft 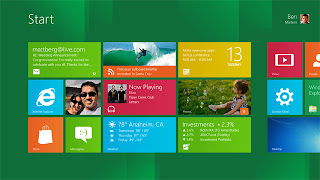 Microsoft recently unveiled that the interface of the coming Windows 8 will be based on Metro. Microsoft's new design language that targets tablet PCs and smart phones. Will Microsoft finally abandon the desktop PC? Will they concentrate on mobile computing? How will they fair with Apple's iOS and Google's Android? Read on.

Metro is the new design language by Microsoft that is targeted for touch operations. Originally used in Windows 7 phones, the Metro style UI will be used in the next operating system of Microsoft, the Windows 8, which will be released late 2012. Although Metro has a support for keyboard and mouse functions, its main target is the touch operation, usually found in tablet PCs and smart phones. Microsoft also added support for the ARM processor found on modern mobile devices today.

What about apps? Apple had thousands of apps on its iTunes Store and Android had its fair share on the Android Market. Legacy apps (those developed for Intel-based Windows) can run on a Windows tablet. But on an ARM equipped tablet or smart phone, they have to develop a new set of apps for it to support the Metro UI.

Unless Microsoft has an ace on its sleeve, convincing the people to choose Metro over Android and iOS could be a very difficult task.

With Microsoft failing each year to convince people to use Bing instead of Google, the future of Metro could not be that bright.
Posted by Siopao Master at 11:36 PM