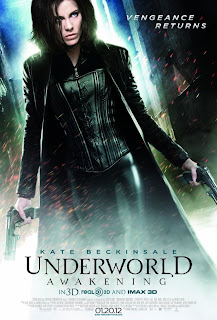 Exactly six years after the last direct sequel (Rise of the Lycans being a prequel in 2009). Underworld reminded us how vampires and werewolves  look and act the way they should really be. Is the six year gap from the original story long enough for the people to appreciate this film? Read on to find out.

Kate Beckinsale running around, jumping, shooting, while wearing a sexy leather suit is enough to give this film a high review...kidding aside, if you're an Underworld fan since the beginning, this film will be a real eyecandy for you.

Guns blazing, explosion, blood and carnage, which made the Underworld franchise, are all present here. The movie just started a minutes ago and blood was already splattering everywhere. Kate Beckinsale, being Selene, was consistent with her portrayal and she performed more actions better than before.

Sadly, during the middle of the film, you will realize that this movie is indeed full of action and violence, story-wise. If you think about it, a little progress to the actual story took place, It just became a killing spree action-packed film and nothing more. Don't get me wrong here. The action and special effects were superb. Selene performing stunts as a real badass vampire should be, but the story really really leaves you hanging after two hours and I must admit, the story is what really Underworld fans were looking forward to.

I guess Underworld took the Resident Evil formula to appeal to the general audience, but the hardcore fans suffered in the process.I think they should concentrate on the story more and just add action scenes in between, not the other way around.

Overall, this is the kind of movie you should never pass on even though the actual story progressed a little, the action, effects and Kate Beckinsale alone can compensate with the shortcomings. What a great way to start the 2012. Selene can kick Belle's ass any given time and that is a fact Twilight fans should accept.
Posted by Siopao Master at 2:30 AM