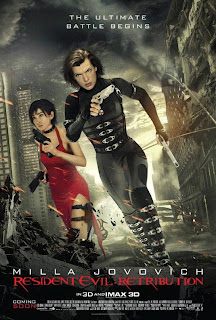 It's kinda uncommon for a movie franchise to get past the trilogy marker unless it has a lot of earnings from the past iterations. The Resident Evil movie franchise got past part four and delivered a fifth installment that sad to say, didn't deliver. Find out why after the jump

Retribution is the direct sequel to Afterlife which was released last 2010 and the fifth sequel to the overall franchise. Word of advice, this review contains spoilers to the movie, but I assure you, it really doesn't matter anyway. Here we go.

The movie gave a recap of the Resident Evil story line so far. This gave new audiences an idea on what's going on and to avoid asking their companions, who watched the other installments (like me) what the hell is happening. This is a good move because even thefans may have forgotten the previous story and doing a recap would be a treat to them.

After that, the rest of the story was crap. Seriously, Even I who watched the previous Resident Evil movies was confused on what the effin' thing is happening. The story is supposed to be after Afterlife but the way things were moving, it did not progress a lot.

Having characters who literally look like their game counterparts was a treat to the Resident Evil fans, but adding them to the story is kinda off. Barry was there, Leon was there, Ada was there, but their roles are far from the game. Well at least they got the Leon-Ada relationship right but hey, what gives with the other characters? Jill Valentine was controlled by the Red Queen via that tiny red contraption attached to her boobs where nobody got the slightest idea to remove it and maybe Jill will return to normal again.

Resurrecting characters from the previous sequels was unnecessary and was just a lame excuse to bring them back on the big screen. Michelle Rodriguez' screen time was too damn many for a supporting role.

Character development? None! Some you thought were key characters seem to die worthlessly and you'll end up sayng "What the hell is that for?". Come on, Ada Wong is a skilled assassin and can get out of danger due to her resourcefulness , but she can't even break from a single handcuff? Barry died because of her!

That final battle with Jill is one of the lamest fight scenes on a Hollywood level film. And Wesker, yes, that buffon is still effin' alive and walks funny!

Seriously, if this is a sign that the writers of the Resident Evil franchise are not thinking of new ideas for the sequel, then expect the six Resident Evil to be lame as this one.

If you are not a fan of the Resident Evil series, avoid this movie like a disease! if you're a fan, feast your eyes on some fan service like Li Bingbing as Ada Wong!

Posted by Siopao Master at 2:23 AM

I love your review! And to be honest, I will definitely be avoiding this movie because I don't think these are my type, however I had to look it up because of my friend's constant nagging.

This blog is so nice to me. I will continue to come here again and again. Visit my link as well. Good luck tik tok video