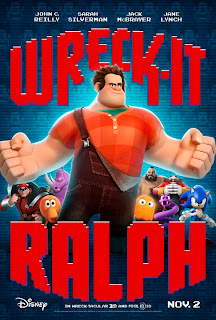 Remember Toy Story? A lot of toys from our childhood made a cameo appearance on that trilogy and it made millions. Here comes another movie from Disney and this time, characters from our video game childhood are gracing the big screen. Since I first saw the trailer, I told myself that I will watch this film no matter what. And when it finally shown here, I rushed to the nearest movie house and watched it. Is it worth the hype? or Is this a disappointment to all the  gamers out there? Find out after the jump

Wreck-It Ralph gives us a peek on what's happening inside an entertainment arcade. After all the customers left, in-game characters interact with each other. It reminisce the concept of Toy Story but hey, this is Disney, they can do that to themselves. Anyway, famous and not so famous game characters were seen through out the film and I must say, it was nostalgic. Never was I so happy on a video game based film (come on, Resident Evil is a poor adaptation of the game). What I liked about the cameo appearances is they didn't got in the way in the story line. It's not like they were forced in a scene where they will show up so that old school and new age gamers can jump for joy. Instead, they were given glimpse of those characters while the story focused on the main characters.

The story? Come on, this is Disney quality. I would recommend this movie to be watched by the whole family, gamer or non gamer. The general concept may have been predictable but how the story progressed made a great impact.

The animation is awesome, although it is not available in 3D here, I would recommend you watch it in full 3D glory if you can. All the action and special effects will leave your jaw hanging, I'll guarantee it.

The musical score and soundtrack was superb as you expect from a Disney production. I was surprised that is there a song performed by the Japanese girl group AKB48. The song is Sugar Rush and you can hear it at the credits

Overall, this movie is a keeper. I do hope they'll make a sequel or a spin-off because gamers will definitely enjoy this film.
Posted by Siopao Master at 6:46 PM

Bike Ride is the amazing one but if you are experienced in biking and the real fun is when you enjoy every race of it. Great share, share also pictures of biking